An electromagnetic field consists of the following components:

These two components of an electromagnetic field are in themselves two separate fields but not totally separate phenomena. E-Fields and H-Fields move at right angles to each other.

Radiated Emissions (E-Field): Radiated emissions are electromagnetic interference (EMI) or disturbances that originate from frequencies generated internally by an electronic or electrical device. Radiated emissions can present challenging compliance issues, for some general guidance please check out our article EMC Radiated emissions common issues and solutions. Radiated emissions are propagated through the air directly from the device’s chassis or from interconnected cables such as signal ports, wired ports such as telecommunication ports or power conductors. A great example is HDMI ports and the associated EMI that can radiate from these cables, we used it as a case study, the article can be found here; EMC compliance for HDMI Radiated Emissions testing (EMI). During EMC testing, radiated emissions measurements are made using a spectrum analyzer and or an EMI receiver and a suitable measuring antenna. 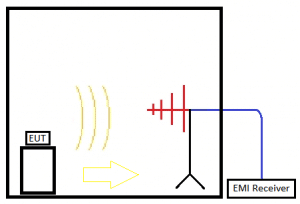 Radiated Emissions (H-field): The magnetic component of the electromagnetic wave is using a spectrum analyzer and or an EMI receiver and a suitable measuring antenna. Typical magnetic field antennas include loop antennas and also include specific antennas as per CISPR 15 such as the Van Veen Loop. The Van Veen Loop antenna is essentially three-loop antennae constructed together that measures the magnetic field emissions of a product in three-axis (X, Y and Z). 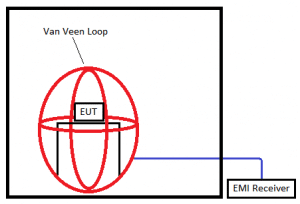 Conducted Emissions (Both continuous and Discontinuous): Conducted emissions are electromagnetic interference (EMI) or disturbances that originate from frequencies generated internally by an electronic or electrical device. These emissions are then propagated along with interconnected cables such as wired ports such as telecommunication ports or power conductors. These emissions can be either continuous (continuously emits at a given frequency) or discontinuous in nature (non-constant, occurring sporadically). During EMC testing, conducted emissions measurements are made on an EMI receiver via an ISN (impedance stabilization network) located within the test chamber. For further information about conducted emissions compliance issues and EMC fixes check out our article; Conducted EMI Emissions – Typical Problems and Common Solutions. 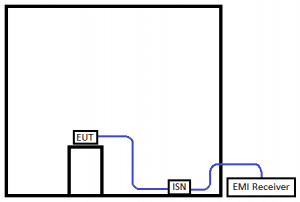 EMC immunity testing can be thought of as either continuous or transient in nature. Continuous testing is applied to a product to simulate RF proximity that may occur in the real world. Transient phenomena are typically short events that involve bursts of energy.

EMC immunity testing requirements are often split based on how electromagnetic interference might couple onto a device:

The test levels, types of interfering signals etc are dependent on the type of device being tested and the standard being applied.

Radiated Immunity: RF signal generators, amplifiers and antennas, are used to produce an electromagnetic field at varying frequencies. The enclosure port of the equipment under test (EUT) and associated cables are exposed to the electromagnetic field via a radiating antenna. The radiated test signal is at a specific amplitude and modulation applied for a specific time period. Most standards requiring immunity testing require this testing to be performed. 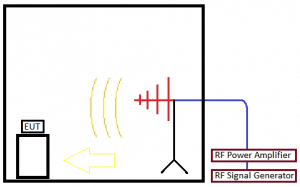 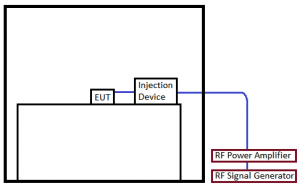 Power-frequency Magnetic Field Immunity: A fluctuating magnetic field is produced by a magnetic coil that oscillates at the mains power frequency (50/60Hz). The EUT is placed inside this fluctuating magnetic field and exposed for enough time to evaluate the performance of the product. Magnetic Field Immunity Testing is usually only required for Magnetically Susceptible Devices. Transient phenomena are short bursts of energy that a product under test will be exposed to for a very short amount of time. Like continuous immunity, transient immunity is applied to a products enclosure port, signal/data ports and power ports where applicable.

Electrical Fast Transient (EFT) / Burst: Fast transients are a series of short pulses that are high in amplitude and repetition frequency with a short rise time. Fast transient phenomena are most often caused by high speed switching events such as interruption of inductive loads and relay contact bounce etc. Typically fast transients testing is applicable to AC & DC ports and signal cables longer than 3m in length.

Surges: Surges are a type of transient phenomena produced by high powered switching events, magnetic/inductive coupling and even lightning. Surge testing on the mains port of a EUT is applied at several phase angles of the mains supply. Typically surge testing is applicable to AC ports and sometimes also DC ports and in some EMC product standards signal cables longer than 30m in length or if the cable may run outside of a building. For further information about the surge, fixes check out our article Surges EMC testing typical problems and solutions.

Voltage Dips, Short Interruptions (VDI) and Voltage Variations: The purpose of voltage dips and short interruption testing is to simulate faults in the power network. These faults may be caused by power-cuts (blackout/brownout events) or by sudden large changes of loads. Voltage variations are typically caused by continuously varying loads connected to the power network. A voltage dip or interruption is a two-dimensional phenomenon that is characterised by the residual voltage (mains voltage after the specified dip) and duration (how long the dip in nominal voltage is applied to the product). This test is only applicable to AC input ports of products. 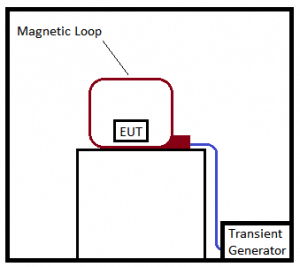 END_OF_DOCUMENT_TOKEN_TO_BE_REPLACED

EN 55032 & CISPR 32 is a specific EMC product standard that covers EMC compliance testing of Multi-Media equipment. Including Information Technology Equipment (ITE), Audio and Video equipment, Broadcast receivers & Combinations. What impact does it have on EMC...

END_OF_DOCUMENT_TOKEN_TO_BE_REPLACED
Manage Cookie Consent
To provide the best experiences, we use technologies like cookies to store and/or access device information. Consenting to these technologies will allow us to process data such as browsing behavior or unique IDs on this site. Not consenting or withdrawing consent, may adversely affect certain features and functions.Clicking Accept or Scrolling automatically accepts cookie consent.
Manage options Manage services Manage vendors Read more about these purposes
View preferences
{title} {title} {title}
GET A QUOTE